GUELPH, Ont. – After a thirteen-year career of international wrestling, Korey Jarvis has retired from the sport.

Jarvis, from Elliot Lake, Ont., represented Canada in the heavyweight 125 kg category at the 2016 Rio Olympics where he finished eighth. He was also the 2014 Commonwealth Games champion, and two-time Commonwealth Games silver medallist in 2010 and 2018.

At the Pan American Games, Jarvis captured silver on home soil in Toronto in 2015 and bronze in Lima in 2019. His best finish at a world championships was seventh in 2017. 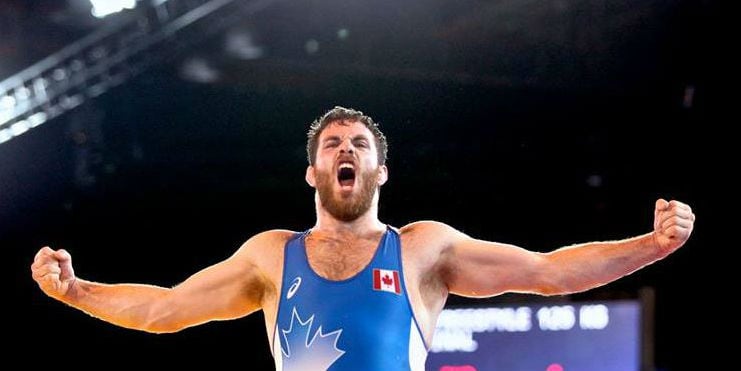 The 34-year-old began wrestling in 2000 with the Elliot Lake Gladiators, before spending most of his career with the Guelph Wrestling Club. Jarvis had a run of over six years where he didn’t lose a match to a Canadian. He was also the first athlete to win the Canadian Championships in three consecutive years in both freestyle and Greco-Roman styles.

“I’m grateful for the opportunity I’ve had to represent Canada over the years,” said Jarvis. “I hope my career has taught my daughter and maybe other wrestlers to work hard to achieve their goals.”

As a mainstay on the Canadian team for the past decade, Jarvis credits his success to his work ethic and perseverance.

“The biggest thing I’ve learned is that you have to work hard to achieve what you want to achieve. Success doesn’t come easily to most, and you really have to put in the time and effort to get where you want to be.”

“Anyone who knows Korey they will say that he is driven and has a heart of a lion,” said Jarvis’ coach at Guelph Doug Cox. “Korey was always a competitor and I think that for that reason he was very successful. Korey also has a great work ethic and is driven to succeed.”

“Korey’s grit in matches has always been a driving force to his success, even when he was not wrestling at his best he was able to pullout wins because he would never give up,” added coach Zoltan Hunyady.

“Korey never shied away from competition. Where most number ones avoid competition he was always willing to step on the mat and compete no matter where the competition was or who he was going to wrestle.”

Jarvis turns his attention now to his family and career. He plans to attend firefighter college and continue raising his daughter.

“It has been a pleasure to see him grow into who he is today,” said Cox. “Korey’s daughter Brynlee is the love of his life and he has done a wonderful job of parenting, all while he was training for World and Olympic teams.”

“Wrestling is responsible for making me who I am today,” said Jarvis. “It’s been a huge part of my life and the relationships I’ve built over the years have meant so much to me.”

📺 – Congratulations once again to Korey Jarvis (@Daddyjar86) on an outstanding career! 🇨🇦 pic.twitter.com/tyK4F7Ur4b

WCL encourages you to donate this GivingTuesday